The Adventures of Tintin: The Secret of the Unicorn

Allan, originally Allan Thompson in French, is one of the main antagonists of the comic book series The Adventures of Tintin. On the Karaboudjan, he initially treated Thomson and Thompson kindly, but was cruel and mean to Tintin. Eventually, he became cruel to Thomson and Thompson as well in subsequent albums due to their association with Tintin. He was in the merchant navy with Pedro and Tom. He served as secondary villain in The Adventures of Tintin: The Secret of the Unicorn.

Allan first appears in Cigars of the Pharaoh as a member of the opium ring known as the Kih-Oskh Brotherhood. Allan is first seen on a sailboat, smuggling drugs across from Egypt to India. Allan and some of his men stop their boat near the Egypt coat line. He then sends some of his men over in a long boat to go pick up some coffins (which they assume contains opium as usual but actually contain Tintin, snowy and Sophocles Sarcophagus, but after the coffins are loaded onto the sailboat, the ship is sighted by a coastguard. Allan is frightened by this and orders his men to dump the coffins. After the coastguard leaves, Allan receives a message saying that the contained important prisoners, causing him to start his search to find them again. The next morning, one of Allan's men sees one of the coffins, containing Sophocles Sarcophagus, and goes to pick him up.
Allan sends out a telegram saying that they have retrieved one coffin and will stop the search because of storm. Allan is frustrated by this until he receives a telegram saying that if the storm continues to abandon search and proceed with the plan. In the television adaptation, he is revealed to be a high ranking member of the brotherhood and is depicted as the leader of the meeting in Gaipajama that Tintin infiltrates. In the same episode, Allan is working in a sailboat, so he has only joined Captain Haddock from the Karaboudjan between The Cigars of the Pharaoh and The Crab with the Golden Claws.

Crab with the Golden ClawsEdit

He next appears as one of the primary antagonists in The Crab with the Golden Claws. In this story, he is the mutinous first-mate of Captain Haddock aboard the Karaboudjan. Here, he smuggles drugs between Morocco and Europe as a henchman of Omar Ben Salaad. He first appears when Tintin and Snowy go down to the docks to see the Karaboudjan and investigate the drowned man. Allan, along with his shipmate Tom, attempt to drop a heavy crate on Tintin, but fail since Tintin was looking at the seagulls. Tintin and Snowy tag along with Thompson and Thomson on board. Allan then orders Tom to take care of Tintin while Allan talked to the detectives. Allan tells the two Thompsons that the man who drowned man went to a pub and got extremely drunk and fell off the Karaboudjan into the water and drowned. The detectives believe him. After the meeting, Tom alerts Allan that he has tied Tintin up, and Allan tells the detectives that Tintin has left the ship without them.
Allan then goes down to Tintin in the hold and Tintin asks him why he is tied up in the hold. Allan tells him "It's no use pretending. You know why better than we do." After Leaving Tintin, Allan reveives a message from Omar Ben Salaad saying to drown him. After he realizes that Tintin has escaped, he along with the rest of the crew start searching for Tintin. He then discovers that Tintin is hiding in another hold and has locked them all out. Allan decides to starve him out, for there was no food in the hold. Allan is then alerted by Jumbo that Captain Haddock, who he keeps as drunk as possible so he can command the ship, wishes for more whisky.
Once there, Allan is further frustrated since Tintin has gone into the cabin and told the captain not to drink. Allan then sees the porthole in the captain's cabin Tintin came though and orders Jumbo to guard it. He then goes back to the hold Tintin is hiding in and orders Tom to blow open the door with TNT. After blowing open the door, they find that Tintin is not there. Allan hurries back up to the captain's cabin, only to find Jumbo tied to a chair. Jumbo says that Tintin was actually hiding in the locker under Captain Haddock's bed. Allan is then alerted by another crewmember that Tintin has tied and gagged the wireless operator. Allan punches the man, knocking him out, and is immediately alerted by another crewmember that Tintin has escaped in the longboat.
Allan is then seen much later in Bagghar and is sighted by Tintin for a short while but Tintin soon looses him. Later, Captain Haddock is sighted by Tom, who alerts Allan through a public telephone. Allan orders him to be captured. Tintin then follows Allan into their hideout and finds Captain Haddock being whipped by one of Omar Ben Salaad men. Tintin holds them up with a gun and rescues the captain, but they end up being chased by the Allan and his men into a room full of wine. They throw wine bottles at Allan and his men, who shoot back but end up hitting the large wine barrels causing them to empty onto the floor. The fumes from the wine causes Tintin and the captain to become drunk. This backfires, as the captain goes crazy and chases the men down the hall and out of the hideout. After Omar Ben Salaad is arrested, Allan attempts a quick escape on a motorboat, but Tintin follows him in another motorboat and captures Allan in a fishing net. Allan is arrested once they reach shore.

Allan reappears in of The Red Sea Sharks, again in league with Rastapopoulos, now known as the Marquis di Gorgonzola. Allan's ship, the Ramona, is used in illegal slave trading. After Tintin, Captain Haddock, and Piotr Skut are on board Marquis di Gorgonzola's cruise ship, Rastapopoulos telephones Allan. He tells him to pretend to offer to take Tintin, Captain Haddock, and Piotr Skut ashore on the Ramona, but actually to dispose of them. Once they have them aboard, Allan locks them in a cabin separate from Piotr Skut. When the Ramona catches fire, Allan offers for Piotr Skut to come with the rest of the crew onto a longboat, but he refuses to go. Allan knocks him out and leaves him on the ship. Allan is shocked when Tintin and the captain, with help from the slaves hidden on board the ship, put out the fire. Allan is agonized by this and orders his men to row back to the ship but, they move away from Allan, leaving him and his men behind.

In Flight 714 to Sydney, Allan helps Rastapopolous in capturing Laszlo Carreidas, along with Tintin and his companions, on the South-East-Asian island of Pulau-Pulau Bomba. Allan takes Tintin, the captain, and the rest of their allies to an old bunker while Rastapopolous attempts to get the bank code from Laszlo Carreidas. He chases the group to a cave after they escape, and threatens to chuck a grenade in after them. After remembering how his boss wanted Carreidas alive, he heaves the active grenade behind him. This backfires, as it explodes on Rastapopolous, greatly angering him.
After going down into the cave after Tintin and the others only to be blocked by a secret door behind a statue of an astronaut, Allan goes back to get dynamite to blow away the statue blocking the passage. He was savagely beaten by escaping Sondonesians, causing him to suffer severe injuries and lose of all his teeth, resulting in babyish speech. Later, he, along with Rastapopolous and company, are captured by aliens and face an unknown fate.

Allan left his trade as a sailor and Rastapopoulos's gang and became a mailman in the United States, presumably under the hypnosis of Mik Kanrokitoff. In the book, he is seen being chased by a dog when delivering a letter. 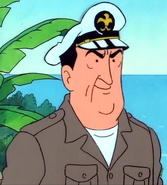 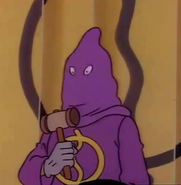 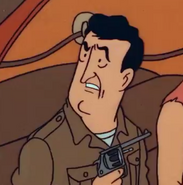 In the movie The Adventures of Tintin: The Secret of the Unicorn, Allan is still depicted as the first mate on the Karaboudjan but is a lackey of Ivan Ivanovitch Sakharine instead of Rastapopolous or Omar Ben Salaad. He is one of the men who pose as delivery men to capture Tintin. Once Tintin is on the ship, Allan, along with Tom, search for the scrolls on the young journalist. As they leave, Allan shuts the door but doesn’t catch Snowy sneaking in. Later, Allan is one of the men who blow open the door to the hold (along with Tom, Neil, and Ali) only to be met with a spray of corks from the wine inside the hold.
Afterwards, he is confronted by Sakharine, who tells him to kill Tintin but let Haddock live. Later, Allan is seen in the radio room with Tom and is one of the men shooting at Tintin as the journalist flees the ship. Once Tintin and Captain Haddock fall into the sea with the lifeboat, Allan tells one of his men to turn the ship around. Despite his efforts, which include hitting a lifeboat with the ship, Tintin and Haddock escape.
Later, in Bagghar, Allan sneaks up on Haddock outside of the palace, as Tom distracts him, and knocks him out with a bottle of alcohol. He takes the scrolls back to Sakharine and shoots at Tintin as he and Haddock, who recovers from the hit, pursue them. After a city wide chase, resulting in Haddock’s capture, Allan and Tom throw Haddock into the harbor at Sakharine's command. In the finale, Allan tries to stop Haddock with his pistol from delivering Sakharine to the cops. After a brief fight, Haddock throws him out of the crane's cabin. Allan falls and lands in the bed of a pickup truck, and is assumedly caught and arrested with the rest of the crew.

Retrieved from "https://tintin.fandom.com/wiki/Allan_Thompson?oldid=27448"
Community content is available under CC-BY-SA unless otherwise noted.