Madame Bianca Castafiore was introduced to the series in the episode King Ottokar's Sceptre. She is, apparently, the leading opera singer of her time. Although this may be the case, Tintin and the captain despise her singing. The few times Castafiore is heard singing, it is always about herself and her jewels. The most common deafening song she sings is the Jewel Song: "Ah my beauty past compare,  these jewels bright I wear!...Was I ever Margarita? Is it I? Come reply!....Mirror mirror tell me truly!" As seen in a few comics/episodes, her voice is high enough and powerful enough to break glass. Many people, especially Captain Haddock could not stand her voice and attempts to insult her behind her back, as seen in the Lake of sharks

Bianca Castafiore is depicted as a preening, melodramatic diva, although she has a kind heart. In The Calculus Affair, for example, she provides a diversion to distract the sinister Colonel Sponsz so that Tintin and Captain Haddock can escape and rescue their friend Cuthbert Calculus. A recurring comic trope in the series is Haddock's aversion to Castafiore, who can never remember his name (addressing him variously as Hammock, Paddock, Padlock, Hemlock, Hassock, Havoc, Maggot, and Bootblack, among other names). Ironically, gossip journalists reported a romance and engagement between Castafiore and Haddock in The Castafiore Emerald, complete with Castafiore showing a disgruntled Haddock the flowers in his own garden. This quite chagrined the captain, but not the diva, who was quite used to such inventions from the tabloids. Her visit to Haddock was correctly predicted by a gypsy fortune teller. Thus, ancient mysticism is proven far more accurate than the modern news media.

Bianca was once falsely imprisoned by the South American dictator General Tapioca, in order to lure Tintin, Haddock, and Calculus to San Theodoros where they prepare a deadly trap for them and Tapioca's rival, General Alcazar. The ruse backfired for Tapioca and the Bordurians who were backing his regime - not least because Bianca expresses contempt of her show trial by forcing the officials to clear the court with an ear-splitting rendition of her Jewel Song. In prison, Bianca throws pasta at her guards because they do not cook it al dente.

Bianca Castafiore is also known as the Milanese Nightingale. Her forename Bianca means "white" (feminine) in Italian, and her surname is Italian for "chaste flower." 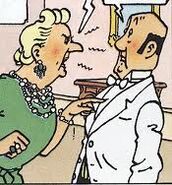 Although apparently one of the leading opera singers of her generation, the only thing that Castafiore is ever heard to sing are a few lines of her "signature aria," the Jewel Song, l'air des bijoux, from Faust, always at ear-splitting volume (and violent force - certainly enough to part the Captain's hair, and a breeze enough to blow back a curtain in an opera box - "She's in fine voice tonight"). At odds with her reputation as a leading opera singer, in The Seven Crystal Balls, she is appearing third on the bill of a variety show, along with a knife thrower, a magician and a clairvoyant. Fortunately for Tintin and Snowy, the glass in the car where she sat with them was strong enough to withstand her voice. However, the duo gradually grow weary with each performance - to the point that they are actively attempting to avoid listening to her during Tintin and the Picaros.

"Come into my arms!"

Bianca Casafiore has reportedly had many relationships but her most prominent one was "with" Captain Haddock. Bianca Casafiore met Captain Haddock while he and Tintin were searching for Professor Calculus. She took an instant liking to the sea captain, despite his slight shock and disgust at the idea. Later on she would continue to run into Tintin and his friends and her flirtations with Haddock only worsened. Eventually she and Haddock were accidentally thought to be engaged, an idea that made Haddock extremely angry. Bianca stated that the press was always setting her up with the most impossible people, hinting that maybe she didn't really and truly like Haddock (at least in that way).

Despite Bianca's obvious attraction to him, Captain Haddock couldn't stand her. He found her singing annoying and her melodramatic personality tiresome. Haddock even began hiding from Bianca whenever he saw her. But even thought she did have many flaws, Haddock always spoke highly of her but only when she wasn't around.

Even if Haddock likes Bianca's appearance, he hates her personality and singing﻿.

Unsurprisingly, opera was one of Hergé's pet hates. Helsingin Sanomat suggested in October 2008 that Castafiore was modelled after Aino Ackté, a Finnish soprano. It is also curious that though la Castafiore is obviously Italian, her pet aria is from a French opera (Faust was composed by Charles Gounod) rather than the Verdi, Puccini, or Donizetti one would expect from a star of La Scala.

Retrieved from "https://tintin.fandom.com/wiki/Bianca_Castafiore?oldid=28321"
Community content is available under CC-BY-SA unless otherwise noted.