Bobby Smiles is the American governor of the rival gang fighting Al Capone in Chicago. Smiles makes an appearance in Tintin in America and he and Tintin combat each other throughout much of the story. Smiles even manages to turn the American Indians against Tintin. He is eventually captured and sent to the police by Tintin's actions. In the animated series equivalent, Tintin in America (TV episode), Smiles works for Capone, rather than against him. 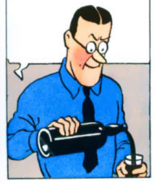 Smiles as seen in the book series

Smiles's original design as seen in the book series