Captain Archibald Haddock is a retired merchant sailor who likes Loch Lomond whiskey and hates mineral water. He is also one of Tintin's closest friends. Haddock is highly addicted to whiskey but he also likes other spirits like rum. He first appeared in The Crab with the Golden Claws and had been in every Tintin book since then.

Captain Haddock sailed over twenty years with his old friend, Captain Chester, before becoming commander of the Karaboudjan where his alcoholism was taken advantage of by his crooked first mate Allan Thompson. Tintin rescued him from the ship and the two friends were barely ever parted again. He is a direct descendant of the 17th century seafarer Sir Francis Haddock, a sea captain under Charles II. He was the captain for two expeditions during his adventures with Tintin, commanding the Aurora in The Shooting Star during the expedition to find the meteorite and the Sirius, Captain Chester's ship that he lent to Haddock to find Red Rackham's treasure. At the end of the latter adventure, Haddock acquired with the proceeds of the sale of his friend Cuthbert Calculus' patent for the Shark-proof submarine, Marlinspike Hall, which once belonged to Captain Haddock's ancestor Francis. Haddock retired from sailing there and invited Tintin and Calculus to indefinitely live there with him.

As for the origin of the name of Captain Haddock's name, who first appeared in Hergé's notes in 1938, according to Philippe Goddin, author of Chronology of a work, it is inspired by Captain Craddock, Franco-German film Hanns Schwarz and Max Vaucorbeil (1931), of which Hergé was a big fan. In the original French version of The Crab with the Golden Claws, Captain Haddock even sings a song in the film: Guys navy. However, according to the first wife of Hergé, Germaine Kiekens, the name "Haddock" comes from the English fish dish, the smoked haddock. However, the name Haddock is a real surname in English, examples such as Sir Richard Haddock (1629-1715) ordered the Royal James at the Battle of Solebay. His second son, Nicholas Haddock followed the career of his father. In addition, Herbert James Haddock (1861-1946) was commander of the White Star Line and the Titanic among others in the technical tests before delivery to the transatlantic company, and then the sister ship of the Titanic, the Olympic.

Captain Haddock was a drunkard, which is one of his weaknesses. He hates drinking anything that doesn´t contain alcohol, like water. He did make attempts to shake this habit, even becoming the president of the Society of Sober Sailors, a seafarers' equivalent to Alcoholics Anonymous. However, when Professor Calculus invented the pills to make consumption of alcohol unpleasant in Tintin and the Picaros, this weakness was gone.

Captain Haddock has a large number of words in his vocabulary he uses to insult or when he is aggravated.

One reason why Bianca Castafiore always has trouble saying Haddock's last name correctly might be because when they first met in the book The Calculus Affair, Haddock was unable to say her name correctly:

And he will say it, 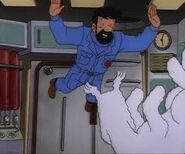 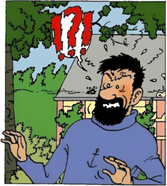 Haddock and Tintin being terrorized by Spalding and Hans Boehm.

Captain Haddock was surprised to see Bianca Castafiore, along with Igor Wagner, and Irma.

Captain Haddock feeling livid when Bianca Castafiore was hugging him.

Captain Haddock as an astronaut as seen in Explorers on the Moon.

Tintin, Captain Haddock, and Snowy exploring the cave on the moon.

Tintin and Haddock uncovers the scrolls and found where the treasure is.

Haddock using a bazooka.
Retrieved from "https://tintin.fandom.com/wiki/Captain_Archibald_Haddock?oldid=27429"
Community content is available under CC-BY-SA unless otherwise noted.