The Carreidas 160 is the private jet of Laszlo Carreidas, the "millionare who never laughs." It was later hi-jacked in Flight 714 by rebellious crew members working for Roberto Rastapopoulos. The only crew who didn't help hi-jack were Piotr Skut and Gino.

It was painted red and white outside, while the interior had green seats. A security camera was hidden over a certain seat and could be viewed from a small television at Carreidas's seat (Carreidas used this CCTV installment to cheat in a game of Battleships against Captain Haddock).  In the back of the plane was a kitchen and a bar.

The plane was later dumped into the ocean by Rastapopulos's men after they landed it at a secret base. It was never seen nor heard from again. 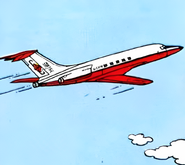 The plane takes off to Sydney.

The interior of the plane which also shows Carreidas and Haddock playing Battleship.

The security camera which is used to watch the passenger.

Skut and Colombani flying the plane.
Add a photo to this gallery
Retrieved from "https://tintin.fandom.com/wiki/Carreidas_160?oldid=27932"
Community content is available under CC-BY-SA unless otherwise noted.