Sons of the Dragon

Chang was closely modelled and named after Zhang Chongren, a sculptor who befriended Hergé in 1934. Zhang was part of a study exchange program, and had come from China to study at the Brussels Académie des Beaux-Arts. Around that time, Hergé was working on the Tintin chapter Cigars of the Pharaoh. A chaplain for Chinese exchange students, Father Gosset of the University of Louvain, reached out to Hergé, inviting him to meet some of the Chinese students to aid in writing about Chinese culture in future Tintin stories.[1] Hergé accepted the invitation, and he was introduced to Zhang. The two immediately became good friends.

Hergé later claimed his friendship with Zhang was a major turning point in his life. He no longer believed in stereotypes and begun to do thorough cultural research for each place Tintin travelled to. Zhang even provided calligraphy work on The Blue Lotus; much of the book's Chinese text was painted by him. Chang is very closely modelled after Zhang as a token of Hergé's appreciation.

The pair first met when Tintin rescued Chang from a flooded river along the way to Hukow. The flood destroyed Chang's orphanage and his grandfather was killed in the war. Chang helped Tintin and the Sons of the Dragon stop the smuggling operations in China run by Mitsuhirato and Roberto Rastapopoulos. He is then adopted by Mr. and Mrs. Wang.

Chang later appears in Tintin in Tibet, where he is lost in the Himalayas after surviving a plane crash and is sheltered by the Yeti. Tintin, Snowy and Captain Haddock then venture to Tibet to rescue him.

After his rescue, Chang travels abroad. He writes a letter to Tintin while in London, which is received by Tintin at Marlinspike Hall just before Bianca Castafiore's arrival in The Castafiore Emerald. 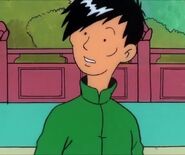