Tintin and Alph-Art
Professor Cuthbert Calculus (French: Professeur Tryphon Tournesol) is a good friend of Tintin, and one of the main characters in the series. He has invented many things, including the rocket in Destination Moon, the shark-resistant submarine in Red Rackham's Treasure, and many more inventions.

The professor is very nearly deaf, but he claims he is just a little hard of hearing in his right ear. It was he who generously supplied the large sum when Captain Haddock bought Marlinspike Hall. The Captain therefore allows him to live there. He often carries around a pendulum that he uses to navigate through the many problems he encounters. Calculus first appeared in Red Rackham's Treasure, and was the last of - and most iconic of - Hergé's long list of absent-minded professors.

Professor Calculus was partly modelled after inventor Auguste Piccard (1884–1962), a Swiss physics professor. Hergé stated in an interview with Numa Sadoul: "Calculus is a reduced-scale Piccard, as the real chap was very tall. He had an interminable neck that sprouted from a collar that was much too large...I made Calculus a mini-Piccard, otherwise I would have had to enlarge the frames of the cartoon strip."[1] Professor Piccard once held a teaching appointment in Brussels, and Hergé happened to spot his unmistakable figure in the street. In The Castafiore Emerald, Bianca Castafiore mentions that Calculus is "famous for his balloon ascensions"[2] - confusing Calculus with Professor Piccard.

In contrast to his unquestionable scientific merits, Calculus is a fervent believer in dowsing, a pseudo-scientific form of divination. Calculus always carries a pendulum around in case he should have to find something with it. Hergé himself believed in dowsing: professional dowser Victor Mertens once used a pendulum to find the lost wedding ring of Hergé's first wife in October 1939.[3]

Professor Calculus was introduced to the series because Hergé enjoyed writing absent-minded professors and scholars. Sophocles Sarcophagus from Cigars of the Pharaoh is often considered to be the prototype for Calculus.[4] Most of the scientists and other figures of high education in the Tintin series are depicted as more stable and level-headed. The only other scholar who comes close to Calculus's eccentricity is Hercules Tarragon, with whom he also attended university.

According to Professor Calculus, he was a great sportsman in his youth, with a highly athletic lifestyle. Upon mishearing Laszlo Carreidas say "battleships", Calculus tells his companions all about his youth:

Battledore? I used to be very good... And not only battledore. I've been an all-round sportsman in my time, though you may not think so now. Tennis, swimming, rugger, soccer, fencing, skating... I did them all in my young days. Not forgetting the ring, too: wrestling, boxing, and even savate...[5]

Calculus attempts to perform a move of the French martial art savate: although he still knows the moves, he is quite rusty at it.

It is likely Professor Calculus attempted these sports during his time in university, through which he earned two PhDs in nuclear and theoretical physics, one PhD in calculus, and an M.Sc. degree in planetary astronomy. He also studied with Hercules Tarragon, a member of the Sanders-Hardiman Expedition. While he sometimes appears aloof when absorbed in his work, Calculus corresponds with other scientists, and also collaborates with many of them on their projects. Notably, he works with Baxter and Frank Wolff on the Moon rocket, and corresponds with ultrasonics expert Alfredo Topolino of Nyon in The Calculus Affair.

When he first appears in Red Rackham's Treasure, Calculus is living in a small apartment that he mainly uses as a lab. Later, he maintains a laboratory at Marlinspike Hall, in which he conducts various experiments. He is fairly protective of his work, on occasion hiding his scientific endeavours from Tintin and Haddock (which gets him into trouble in The Calculus Affair). Later in that same book, his lab is stripped of all its equipment and research notes, something Calculus himself had feared. On an earlier occasion, during his efforts to find an antidote to Formula #14 in Land of Black Gold, Calculus almost destroyed half of Marlinspike Hall by way of an explosion.

The professor is a genius who has demonstrated himself as an expert in many fields of science. He is shown to be an experienced engineer, archaeologist, biologist and chemist. He is often tinkering in hopes of finding the next big scientific advancement. Calculus's inventions are intended to benefit mankind one way or another; one such invention was Stopalcol, a pill that makes alcohol taste terrible to the patient, which Calculus hoped would cure alcoholism. Calculus absolutely refuses to make weapons, even when being detained and pressured by the Bordurians to produce weapons of mass destruction for them. Some of Calculus's more dangerous endeavours are criticized by Captain Haddock, who sees it as needlessly risky.

Although generally mild-mannered, Calculus flies into an uncharacteristic rage if he feels insulted or ridiculed. He is especially provoked if he ever hears the Captain, or anyone else for that matter, call him a "goat". On one famous occasion in Destination Moon, he displays uncontrollable ire when an irritated Haddock accuses him of "acting the goat" by attempting to build a moon rocket. Calculus's subsequent tirade and blatant disregard for security terrifies the usually ebullient Captain, and Calculus even lifts the director of security barring his way onto a coat rack. (In the original French, "faire le zouave" sets him off, which is not an exact translation of "acting the goat" but roughly means "acting the idiot". In the 1960 American Golden Press edition, the offending phrase is "acting like a goat".)

Another occasion of Calculus's rare but sudden wrath is in Flight 714 when, due to a misunderstanding, Laszlo Carreidas knocks Calculus's hat off his head. Calculus begins to throttle Carreidas and has to be pulled back with great effort by Haddock and Tintin. Despite his gentle nature, Calculus is rather sensitive about his scientific work, and does not appreciate being ridiculed or belittled for his efforts.

Calculus's deafness is a frequent source of pun humour through his interactions with other people, as he often repeats back what he thinks he has heard, usually in the most unlikely words possible. Additionally, he often diverts the subject of a conversation by responding to a misinterpreted remark. For example, "But I never knew you had..." leads Calculus to respond, "No, young man, I am not mad!" In the same book, he believes that Tintin and Haddock are talking about his sister, before remembering a few moments later that he does not have a sister. He is not bothered at all by his handicap, in contrast to his friends' deep frustration. He himself does not admit to being near-deaf, and insists that he is "only a little hard of hearing in one ear."

Fortunately, during the course of the Moon books, Calculus begins carrying around an early hearing-aid device, the ear trumpet, to hear others with. He adopts the device when he begins leading a team of scientists and engineers to work on a major rocket project. Later, he adopts an early in-ear hearing aid, and for the duration of the adventure he has near-perfect hearing. During this time, Calculus becomes a more serious character who even displays strong leadership qualities. However, after completing the journey to the moon, Calculus discards his hearing aid in favour of occasionally carrying around the ear trumpet. He can be seen using it as late as The Castafiore Emerald.

Tintin, Captain Haddock, and Calculus are devoted to each other as comrades and crime fighters. Tintin and Haddock even travel across the world on at least two occasions (Prisoners of the Sun and The Calculus Affair) in order to save Calculus from kidnappers. Calculus seems to also have many friends throughout the scientific community. One such friend is the ebullient Professor Tarragon, with whom Calculus is on a first-name basis. The two still get along like old classmates, as much as Tarragon towers over Calculus in stature.

Professor Calculus is surprisingly popular with women, and has shown more interest in women than any other character in the series. This is notably evident in his interactions with Bianca Castafiore, with whom he becomes smitten during her long stay at Marlinspike Hall in The Castafiore Emerald. During her stay, Calculus is inspired to try his hand at botanic experimentation in order to create a new variety of white roses, named "Bianca" in her honour. Nonetheless, he happily congratulates Captain Haddock on his "engagement" to Castafiore - which was actually a tabloid rumour that got out of hand.

In Tintin and the Picaros, Calculus is so distressed by Castafiore's imprisonment that he is adamant about going to her defence. Later in the story, he is charmed by the abrasive Peggy Alcazar, wife of General Alcazar, after mishearing her furious ranting as an animated warm welcome. Calculus goes so far as to kiss Peggy's hand, and somehow, this disarms Peggy enough to make her leave Alcazar and Tintin alone. 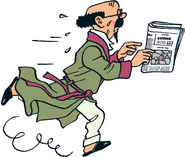 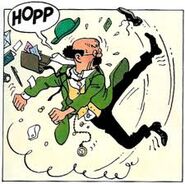 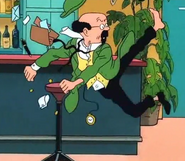 Calculus has been responsible for a number of gadgets and machines over the years. Some of the most notable inventions are listed below:

In the 1970s and 1980s, Calculus starred in a series of animated television commercials for Fruit d'Or products. Since these commercials were in French, Calculus was known by his original name of Tournesol, or "sunflower", which tied into Fruit d'Or's cooking oil and mayonnaise made from sunflower oil. Some of the ads would conclude with Calculus floating up into the air to demonstrate how they kept a good healthy balance. Other characters from the books were also featured in these ads.[1]

Real world British musicians Stephen "Tin Tin" Duffy (founding member of Duran Duran) and Roger Freeman (former member of Pigbag) formed a musical duo project known as Doctor Calculus. They were active from 1982 to 1986, and released two singles and one album under the Doctor Calculus name.