Tintin Wiki
Register
Don't have an account?
Sign In
Advertisement
in: Characters, Villains, The Black Island Debutants,
and 3 more
English

The Red Sea Sharks
Doctor Jorgen Wilhelm Müller (French: Docteur Müller), also known as Mull Pasha or just Müller, but most known as J.W Müller, is a psychiatrist whose position and credentials serve more as a cover for his more criminal activities, including that of a criminal, secret agent and mercenary for hire.

He also appeared in Land of Black Gold and The Red Sea Sharks. In the later two books, he aided the Arab rebel Bab El Ehr in his efforts to remove the Emir of Khemed, Mohammed Ben Kalish Ezab. He designed Formula 14, a chemical substance which increases the explosive properties of petrol, and incapacitated the pipelines of Arabex, the Emir's favoured fuel company. Upon the discovery of Formula 14 by Tintin, he pulls another pistol from his jacket and holds it to his head in an attempt to commit suicide, but when he pulls the trigger, ink squirts out, as it was rigged by the Emir Mohammed ben Khalish Ezab's son, Abdullah.

By the time of The Red Sea Sharks, Müller changed his name to Mull Pasha, as seen in the stack of tabloid clippings near the end of the book. He ordered Tintin and Captain Haddock's deaths but after a grammatical mistake with Colonel Achmed, they manage to blow up their own tanks searching for Tintin as he travels to the Emir.

In The Black Island, he has a goatee and moustache, but by the later two books in which he appears, he had grown a full beard, permitting him to easily disguise himself as an Arab. Once Bab el Ehr is overthrown at the end of The Red Sea Sharks, he is also captured and presumably executed or incarcerated. 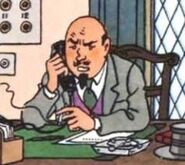 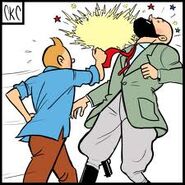 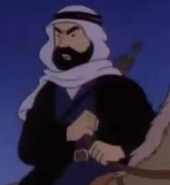