The moon rocket was a rocket invented by Cuthbert Calculus. It is red in color and it has red and white square patterns in the middle predictively with 5 decks.

There is a lab, for possible display of satellites and oxygen cylinders and there is a control cabin for the main controls of the rocket and there is a living deck where there are bunk beds for rest, a little kitchen and dining table all in one and a deck with air locks panels. 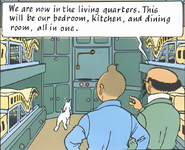 the Moon Rocket under construction

The first cameo of the moon rocket in the 2011 motion-capture film.
Community content is available under CC-BY-SA unless otherwise noted.
Advertisement