Flight_714, Tintin_and_Alph-Art (only in Yves_Rodier's version)
Roberto J. Rastapopoulos (Greek: Ροβέρτος Ρασταπόπουλος) is a reoccurring character in Hergé's The Adventures of Tintin comic book series. He is Tintin's archenemy, a ruthless business tycoon. Rastapopoulos is the owner of Cosmos Pictures (Production in some translations), a studio house that is a front for many of his illegal activities. He goes by a number of pseudonyms, including the Marquis di Gorgonzola in The Red Sea Sharks.

Rastapopoulos first appeared as a stock character in Tintin in America, where he appears seated beside Tintin at a banquet being held in Tintin's honour. Hergé soon brought Rastapopoulos back for Cigars of the Pharaoh (serialized in Le Petit Vingtième from 8 December 1932 to 8 February 1934), finally naming him and establishing him as a film producer and businessman.

Towards the end of the 1940s, Hergé began to model Rastapopoulos after Aristote Onassis, a Greek shipping tycoon who infamously sold warships during World War II.[1] In addition, Rastapopoulos's implied relationship with Bianca Castafiore during The Red Sea Sharks is a parody of Onassis's affair with opera singer Maria Callas, who was one of the real world inspirations for Castafiore.[2]

Not much is ever shown in canon of Rastapopoulos's life before Tintin meets him. According to official sources, Rastapopoulos was born in 1891 on the Greek island of Leros.[3] His father was a sponge diver, and he had three brothers and two sisters. In Flight 714 to Sydney, Rastapopoulos falls under the effects of Dr. Krollspell's truth serum and begins to argue with Lazlo Carreidas over which of them is the most evil. Rastapopoulos reveals that he financially drained his other family members when he was a young man, and it is possible that this is how he first built his wealth.[4]

At his peak, Rastapopoulos was the founder of Cosmos Pictures, a movie studio and production company, the owner of Arabair Airlines, and the leader of the Kih-Oskh secret society and drug trafficking ring. While Cosmos produced legitimate theatrical films, it was part of a money laundering scheme for Rastapopoulos's criminal activities. Cosmos and Arabair both provided a cover for his constant travelling; the film "Arabian Knights" is being filmed near Abudin, just around the same time as a Kih-Oskh Brotherhood meeting. Rastapopoulos's goal is to maintain status as a wealthy debutante, no matter how many times Tintin gets in his way.

Towards the end of Tintin in America, Rastapopoulos is seen attending a banquet hosted in Tintin's honour, seated beside a blonde actress. However, he is not mentioned by name.

Cigars of the Pharaoh and The Blue Lotus

Rastapopoulos's first major appearance is in Cigars of the Pharaoh, where he is initially depicted as a sympathetic film producer. However, there are hints within the story to his villainous identity. The poet Zloty is poisoned, and as he begins to receive the effects of the poison, he struggles to tell Tintin that the leader of the Kih-Oskh Brotherhood has some connection to the movie industry before finally going mad. At the end of the book, a newspaper page displays a photo of Thompson and Thomson falling over a staircase. To the left of the photo an article can be glimpsed revealing that Rastapopoulos is missing-. However, it is not until the climax of The Blue Lotus, the follow-up to Cigars of the Pharaoh, that Rastapopoulos is openly revealed to be the head of the sinister opium cartel against which Tintin has been pitting his wits during the course of two books. After a failed attempt to kill Tintin, Rastapopoulos is arrested.

Rastapopoulos subsequently resurfaces in The Red Sea Sharks under the guise of the Marquis di Gorgonzola, having been forced to assume a new identity after he was arrested for his previous crimes. He can be seen hosting an opulent costume party on a personal yacht, accompanied by Bianca Castafiore, but unbeknownst to Castafiore and all the party guests, "the Marquis" is simultaneously operating a slave trading operation. Rastapopoulos's ever-loyal henchman Allan Thompson attempts to burn down the boat carrying Tintin, Haddock, Skut, and the trafficked migrant workers, but Tintin's crew is able to save and take control of the ship.

Tintin and Haddock report the slave trading ring to the authorities. Rastapopoulos's yacht is soon surrounded by US navy warships ordering him to come aboard and be arrested. However, while pretending to take a small boat over to the warships, Rastapopoulos's boat appears to malfunction and sink to the bottom of the ocean, while he secretly escapes in a private submarine.

Madame Castafiore references the Marquis di Gorgonzola as one of the many men who tabloids have accused her of getting engaged to. Castafiore was on the Marquis's yacht in The Red Sea Sharks, and official sources say the two of them were dating,[2] but she was likely completely unaware Rastapopoulos was dealing in human trafficking.

Sometime after The Red Sea Sharks, Rastapopulos became bankrupt. Rather than spend the effort to amass yet another fortune under a new name, he decided to kidnap the millionaire Laszlo Carriedas, Tintin and his companions in Flight 714 to gain the password to Carriedas's multi-million Swiss Bank account, concluding that it is easier to steal Carreidas's money than make his own fortune all over again. However he and his gang ran into a UFO during the plot, and he was hypnotized by Mik Kanrokitoff and captured by aliens when he unwittingly uses an island that is regularly used by the aliens as a location to make contact with various terrestrial agents as his base. His ultimate fate is unknown, however, many believe him to be Endaddine Akass. Some of Herge's notes that were found after his death reveal that Rastapopolous was intended to have woken up on a desert island after forgetting the entire plan to capture Carreidas.

In 2004, Yves Rodier's Alph-Art pastiche was officially released and authorized by Moulinsart. The villain Endaddine Akass is revealed to be Rastapopoulos under a new identity. He explains to Tintin that he underwent plastic surgery and murders a famous artist to take his place. As Akass, he deals in forged art and is gets Ramo Nash to sell it. Akass also owns a villa in Italy to which Tintin and Captain Haddock visit. He tries to turn Tintin into a Cesar, leaving Tintin's fate unknown. He then reveals himself to be Rastapopoulos. It is unknown how he escaped from the aliens some time after Flight 714, and he has no memories of what happened after the island's volcano erupted. In the end, Nash gets Rastapopoulos' hand stuck in the rope he was going to use to hang Tintin and Haddock. Rastapopoulos then falls off the tree into the canyon and plummets to his death. Italian authorities grant Tintin ownership of Akass's estate as compensation for his efforts. 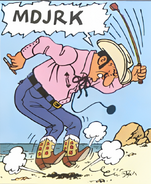 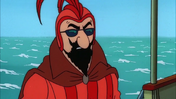 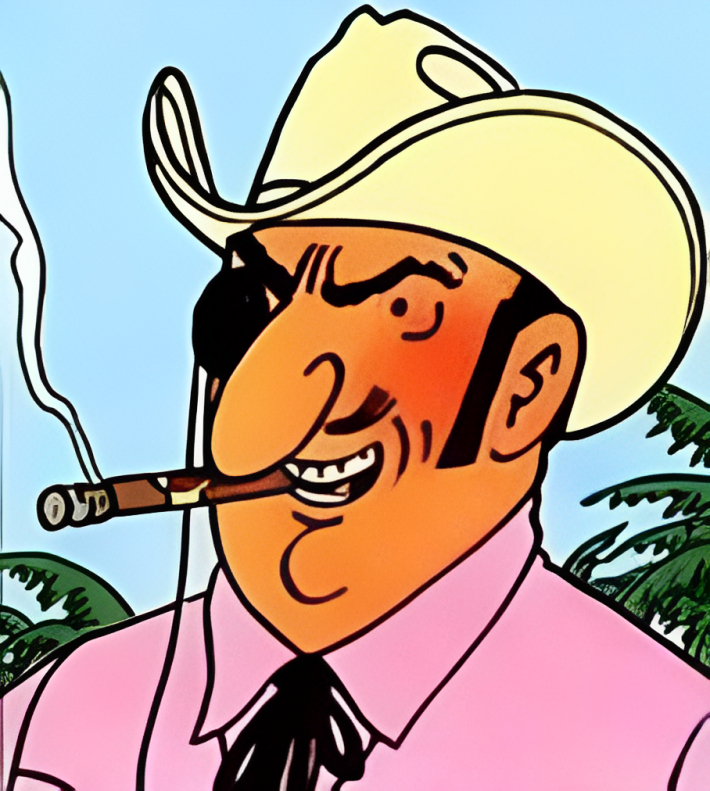 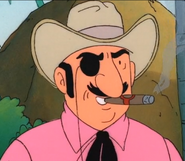