Snowy (French: Milou) is Tintin's Wire Fox Terrier dog and a protagonist of the series. The bond between the two is significantly strong, as they have saved each other's lives numerous times throughout the series. Snowy seldom "speaks", but is instead seen thinking. When we are in Snowy's mind, it generally consists of a debate between a "good" and "bad" version of Snowy's conscience. This usually ends up in catastrophe for Snowy, as usually the "wrong" choice is made. Finally, note the interesting evolution of the character over the albums, lost the gift of thought expressed in words to images and content become virtually silent. Snowy is clearly able to communicate with Tintin in the series. Like Captain Haddock, Snowy is quite fond of Loch Lomond brand whisky. Snowy rarely leaves Tintin's side intentionally, only doing so when the two have been forcefully separated. Unfailingly, the pair are always reunited at the end of the adventure.

From the very beginning, Snowy is the inseparable companion of Tintin and follows him everywhere, against all odds, through many ups and downs faced by his master. Although Snowy is a dog, he has a surprisingly lively and alert character, thinks and feels, but communicates by speaking with people in Tintin in America. He is rather boastful, mocking, quite likely, superstitious and very sensitive. He is sometimes faced with problems of moral order, racked between duty and his old demons (including alcohol and bones). Over the adventures he shows more homebody [?]. Snowy has a good general knowledge and always answers to his master. Snowy is a quadruped land mammal. In this sense, he has a keen flair and a great intuition. Often, he urges against dangerous situations where his master will get involved, but he is always there to come to the rescue. He also knows when there is unseen danger and tries to alert Tintin. As a dog, Snowy loves bones. However, he takes this to the extreme, which is to say to the greediness which will impose difficult choices in certain situations. He is also fond of all kinds of meats and sausages, especially chicken. Snowy has a taste for alcohol, especially the whisky "Loch Lomond." He does not disdain either rum or champagne. Snowy has little contact with people other than Tintin and his friends. On many occasions, the opponents of Tintin try to eliminate Snowy, often trying to chloroform him, but to no avail. However, he maintains much more friendly relationships with children such as the Crown Prince of Gaipajama, Zorrino and Lobsang. His relationships with other animals are equally as difficult. Attacked from all sides by boa, buffalo, goat, condor, crab, crocodile, gorilla, eel, hedgehog, cow, parrots and other wild beasts, Snowy seems far removed from its congeners. He also demonstrated arachnophobia, a fear of spiders. In Marlinspike Hall, Snowy at first had a tense relationship with the resident cat, until befriending it over time.

Originally Snowy was the sole source of dry and cynical commentary of Hergé's work, to try and balance out Tintin's more positive and optimistic outlook. Snowy's original French name, Milou, is notably similar to the nickname of Hergé's first girlfriend, "Malou" (a contraction of the name Marie-Louise).[1] "Milou" seems to be intended as a masculine form of "Malou", since Snowy is referred to as male through the entire series.

Snowy's character has evolved over the course of The Adventures of Tintin series, particularly after the introduction of Captain Haddock's character in The Crab with the Golden Claws. Before Haddock's first appearance Snowy was the chief source of cynicism and alternate viewpoints. Snowy's part then slowly changed into a more light-hearted role of comic relief, examples being how he chases the cat at Marlinspike Hall (until they become friendly at the end of The Calculus Affair) and drinks the Captain's whiskey.

Throughout the series, Snowy is Tintin's sidekick and companion on journeys. Along with Tintin he is the only character to appear in all of the comic albums. In the debut album Tintin in the Land of the Soviets, Snowy is a source of comic relief. Throughout the first eight stories Snowy is the series' co-star, able to understand human language, and communicates with speech bubbles. His verbal responses to various situations include jokes, expressions of fright, and pleas to Tintin to exercise caution. In the early albums he takes an interest in mechanics and geography; in Tintin in the Congo, he makes biblical references. As a dog, he also sniffs, tracks, chases, and bites.

The character of Snowy evolved through the course of the Tintin series. In early works he exchanges dialog with other characters, including animals, and provides a running commentary on the situation. His character then became affected by the introduction of Captain Haddock in The Crab with the Golden Claws. Before Haddock's appearance, Snowy was the source of dry and cynical side-commentary, which balanced out Tintin's constantly positive, optimistic perspective. When Haddock entered the series, the Captain took over the role of the cynic, and Snowy gradually shifted into a more light-hearted role, having dialog only with Tintin.

Snowy is portrayed as brave and is often fearless, even against much larger creatures when Tintin is threatened. He has no qualms attacking animals larger than himself, which consistently leads to him being sacrificed by humans, although he is always rescued. These can be seen in Cigars of the Pharaoh and The Broken Ear. He repeatedly frees Tintin from captivity, saving him from dangerous situations, and will sometimes identify a villain before Tintin. The Black Island and The Shooting Star show his only fear of arachnophobia. Snowy is loyal to Tintin and always wishes to stay by his master's side: in a scene in The Shooting Star when Tintin temporarily abandoned him, Snowy was inconsolable.

Snowy loves whiskey, and occasionally gets drunk (as occurred in Tintin in the Land of the Soviets, Tintin in Tibet and Tintin and the Picaros. His appetite for food is the basis for several short, comical sequences. The dog's biggest lust is for bones. This is repeatedly the centre of moral dilemmas, as Snowy has to decide between carrying out important tasks, such as carrying an SOS message, and picking up a bone, as evidenced in King Ottokar's Sceptre. Snowy indulges in rowdy behaviour chasing the Siamese cat at Marlinspike Hall until the two become friends at the end of The Calculus Affair. Snowy often adds to the story in notable ways. For instance, Snowy is the only character in Flight 714 to Sydney to escape mass hypnosis and to know of their abduction by aliens.

Snowy's tail is subjected to various injuries all through The Adventures of Tintin series. These injuries range from being pulled, bitten, shot, and burnt. These traumatic events were used mainly as comic relief and became less numerous as the series continued, due to the introduction of other accident-prone characters such as Thompson and Thomson, Captain Haddock and Professor Calculus, which add to the comedic tone the series is known for. 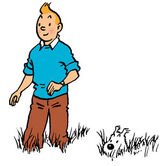 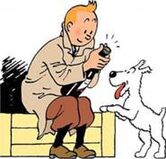 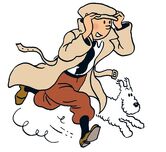 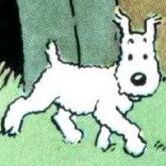 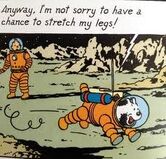 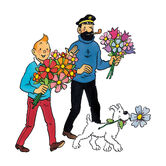 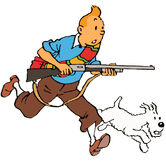 Snowy being shot in his tail.

Snowy, walking along with Captain Haddock and Tintin 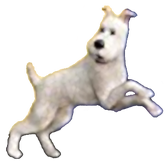 Snowy in the The Adventures of Tintin: The Secret of the Unicorn.