Tintin in the Congo

"To be precise..."
—Thomson and Thompson

Thomson and Thompson (French: Dupond et Dupont), also known as "The Thompson Twins," are a pair of inept Scotland Yard detectives. They were first introduced in Cigars of the Pharaoh, but do briefly cameo on the first page of Tintin in the Congo.

Though very alike in appearance, there is controversy as to whether they are related or not. Snowy himself seems to be inclined towards the former, he mentions offhand in Destination Moon that "This is it!...Sensational appearance of the Thomson twins!" [1] They are distinguishable by their moustaches. Thompson's moustache is straight while Thomson's turns up. They believe almost anything and are quick to jump to conclusions at first glance. In the episode The Land of Black Gold, the detectives mistakenly take a substance called "Formula 14," believing it to be aspirin. This chemical causes their hair to grow rapidly and change colour and they hiccup continuously. They have also arrested Tintin in the episode The Black Island for robbery.

Hergé was inspired to make the Thompsons after seeing a particular magazine cover, on the March 2, 1919 issue of Paris weekly Le Miroir. The cover was a photograph of two detectives with bowler hats and thick moustaches; one of the detectives is handcuffed to a suspect they just arrested, and the other detective is tending to their umbrellas. In addition, Hergé's father and uncle were extremely similar-looking and prone to both dressing in similar dark suits.

Thomson and Thompson first appeared in the original black and white newsprint version of Cigars of the Pharaoh. The two were only identified as X-33 and X-33A, their Interpol code names.[2] In later stories, and the revised colour version of the story, they finally were given names. In French, they were called Dupond and Dupont.

Originally, this was their first-ever appearance, but they were retroactively added to the redrawn colour version of Tintin in the Congo. They are visible in the right corner of the first panel, with one of them saying, "Seems to be a young reporter going to Africa."[3]

Of the 19 books following the Cigars of the Pharaoh, not including the unfinished Tintin and Alph-Art and the cartooning of Tintin and the Lake of Sharks, they appear in 17. The only two books they do not appear in are Tintin in Tibet and Flight 714. Although their appearances may vary in importance depending on the album, they always add humor to the story and sometimes are involved in subplots, eventually achieving success by sheer luck or with Tintin's intervention.

As members of Scotland Yard and Interpol, Thompson and Thomson lead more or less discrete and efficient investigations. They are bumbling and hardly brilliant. They test the limits of discretion, dressing up in folkloric costumes in order to "blend in," which inevitably only leads to them sticking out more. They also pile up an incredible number of falls, slips and accidents, even when they claim they will be extra careful. The epitome of stupidity, they followed their own footprints in the desert during Land of Black Gold. Their total disorganization is also reflected in their language. They are experts in pleonasms and have to their credit sayings such as "I would say even more," "our lips are sealed," and "it is my opinion and I share it." Their motto, as mentioned, is "Mum's the word," which is immediately corrected to be "Dumb's the word." Also, Thomson always states "to be precise," and then either restates the statement his twin said or says the sentence mixed-up, such as instead of "He's given us the slip. Got away, with the handcuffs too. What a cheek," he says "To be precise, he's given us away. Slipped us the handcuffs, too. What a sneak." Their introduction is also humorous; Thompson identifies himself as "Thompson, with a p, as in psychology...", philosophy, or any other "p" word in which the beginning "p" is either silent or coupled with an "h" in order to change pronunciation to an "f" sound, Thomson's intro is a similar sounding, "Thomson, without a P, as in Venezuela" or any other amusing sounding name not starting with a "p".

Thomson and Thompson have fair skin, half balding black hair and their mustaches weren't to be the same but Thomson's was curved and Thompson's was clean combed, and wears black jacket, white shirt, black necktie, matching trousers and shoes, brown shoes and carries matching wooden canes.

In the 2011 animated film, they have fair skin, black half balding hair and mustaches and bright brown eyes.

The duo are also renowned for their use of disguises in their detective work. They are usually used in an attempt to blend in with the crowd in foreign locations or different settings. However, the pair end up in the most ridiculous of costumes, making them more visible.

In the original French, their names are Dupont and Dupond. The translations for some languages​​ are listed below.

'To be precise' quotes

This contains a list of scenarios in which the phrase 'to be precise' is used.

4. Thomson: “This time our honour is at stake! We have sworn to find the sceptre; we must keep out word!” Thompson: To be precise: we must keep our word!”

2. Tintin has just asked the Thompsons what was up. Thompson: "Everything's fine: we've just been entrusted with a very important case." Thomson: "To be precise: a very... er ... important case." -pg.3

4. They are talking to Allan, having no idea that he's a crook. Thomson: "...so this sailor used to drink. On the night of his death you met him in the town, very drunk; then he fell into the water trying to get back to the ship. Plain as a pikestaff!" Thompson: "To be precise: plain as a pikestaff." -pg.11

The Secret of the Unicorn

3. The sun shining through the magnifying Thomson is holding is burning his jacket. Thomson: “Very odd... To be precise... Can you smell something burning?” -pg.29

4. Thompson: “You never ordered us to stop pumping, Captain. So here we are, pumping.” Thomson: “To be precise: we’re pumping.” -pg.45

2. Thomson: “It is my duty, Dr. Midge, my duty... To be precise: headquarters expects that every detective will do his duty.” -p.22

Prisoners of the Sun

3. The Thompsons don’t know where Tintin, Captain, are. They looked for them and now are reporting back to headquarters. Thomson:“We’ve searched South America from top to bottom, sir, without result. We lost all trace of Tintin, the Captain, and the Professor.” Thompson: “To be precise: we got lost.” -p.51

4. Thomson: “We have decided to undertake a fresh search using entirely new methods. It’s the only way: otherwise we have absolutely no hope.” Thompson: “To be precise: we’re absolutely hopeless.” -p.51

2. The Thompsons just got kicked down stairs. Thomson: “How uncouth!” Thompson: “To be precise: most impolite! But you have to admit, he’s got plenty of push...” -p.8

2. Thompson: “I don’t know why, but it strikes me that Baxter and Wolff are behaving suspiciously.” Thomson: “To be precise: most auspiciously.” -p.23

Explorers On The Moon

2.Captain Haddock Calls the Thompsons Punch and Judy Men Thomson "Yes, you sir! ...Did you or did you not say that we need two Punch-and-Judy men on the pier, and we'd do perfectly for the job? ...Isn't that insulting us?" Thompson "Quite right! ...This man has apologized to us, and we demand an insult!" -p.19

2. Thompson: "Why are we suspect? I mean, what do we suspect? My dear fellow, if you imagine we'll tell you he's smuggling aircraft, you're much mistaken. "Mum's the word", that's our motto." Thomson: "Well said!... To be precise: "Dumb's the word", that's our motto. The general may have come to Europe to buy up old aircraft, but you won't learn that from us! Now we must be going. Goodbye, Tintin." -p.10

4. The Thompsons are about to be executed by being shot. They are being offered blindfolds. Thompson: “Blindfolds? Certainly not! ...A Thompson looks death straight in the face!” Thomson: “To be precise: A Thomson with a straight face looks like death!” -p.60 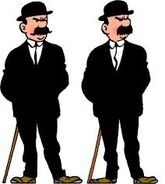 Thompson & Thomson without their hats as seen in The Secret of the Unicorn (TV episode). 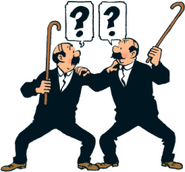 The detectives had a brief appearance in Asterix in Belgium, in 1979, the last album of Uderzo & Goscinny together. In the cartoon, they appear dressed in traditional Belgian, and announce the arrival of Julius Caesar. It is a clear reference to the beloved characters and a tribute of the creators of Asterix to Herge, in respect to fame and honour of Belgian comics. To be precise, they appear on page 31.

The pair also inspired the name for the British New Wave rock band, The Thompson Twins (Even though the band has had as many as seven members at a time), who were most famous for their hit 1983 song, "Hold Me Now."