Tintin Wiki
Register
Don't have an account?
Sign In
Advertisement
in: The Adventures of Tintin, Albums, Original Style
English

Tintin in the Congo

The Adventures Of Tintin, Reporter For Le Petit Vingtiéme, In The Land Of The Soviets is a comic book by Hergé. It is the very first book of The Adventures of Tintin, The book version was released in 1930 after the original serialized version ended. It tells the story of a young Belgian reporter named Tintin, and his pet fox-terrier, called Snowy, who travel to Moscow, and get into endless trouble there. The book is 141 pages long, and all the illustrations in the book are in black and white. The book was quite popular, and Hergé decided to write a sequel, which was entitled Tintin in the Congo.

Tintin, a reporter for Le Petit Vingtieme, and his dog Snowy are sent on assignment to the Soviet Union. Departing from Brussels, his train is blown up en route to Moscow by an agent of the Soviet secret police, the OGPU. Tintin survives and is blamed by the authorities in Berlin for the "accident". He is put in jail and even taken to a torture chamber, but escapes (here and in later imprisonments, which are common) by deceit and disguise. He then steals a car and goes through several adventures before eventually reaching Moscow.

In observing a Soviet election, Tintin finds that the Communists coerce people to vote for their list by pointing guns at them, and that apparently productive factories are just hollow shells intended to fool British communists by burning hay to produce smoke and hitting large sheets of corrugated iron to imitate the sound of machinery. In wandering the streets of Moscow, he discovers that Soviet authorities hand out bread to starving children only if they declare themselves Communists; if they fail to do so, the children are beaten and refused food. Due to the relegation of the bulk of Russia's wheat crop to export, so as to maintain the illusion that Russia is wealthy and can therefore afford to send huge quantities away, Moscow is experiencing severe famine. Thus, the Communist leadership plans to pillage productive farms. Tintin manages to save several kulaks by warning them of the approaching troops, but is again captured when he attracts the attention of a military officer.

Escaping across the snowy wastes, Tintin stumbles upon the secret cache of riches that Stalin, Lenin, and Trotsky have stolen from the Soviet people (including an ample supply of wheat, vodka, and caviar). Armed with this knowledge, he flees Russia via airplane, landing in Tempelhof Airport in Berlin, where he has a final encounter with OGPU agents who attempt to dispose of him before he can reveal what he has seen in the U.S.S.R. Finally returning to Belgium, he is greeted with great pomp by the rapturous public, arriving to a tremendous reception in the Grand Place in Brussels. 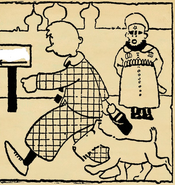