Tom is sailor and criminal worker who works for Allan Thompson.

Tom appears in Cigars of the Pharaoh as one of the Allan Thompson crew members aboard a sailboat smuggling drugs from Cairo to Gaipajama. Tom, along with two other men in a longboat, row over to a rocky cove in Cairo to pick up three coffins from Mohammed and some Egyptians. Tom assumes they contain opium, although they actually contain Tintin, Snowy, and Sophocles Sarcophagus. After they load the coffins on board the sailboat, a coastguard sails over and orders to search the ship. Allan Thompson orders Tom and the sailors to dump the coffins overboard, assuming they contain opium. Tom is not named in this book, but he along with Allan manage to get away from the opium trade, free of charge, and go to join Captain Haddock's crew.

Tom appears again as one of the crew members aboard the Karaboudjan. He along with the rest of the crew, led by Allan Thompson, use the Karaboudjan for smuggling opium from Europe to Morocco. When Tintin boards the Karaboudjan with Thomson and Thompson, Allan Thompson orders Tom to capture Tintin while he talks to the detectives about a recent "accident" with a man who fell overboard and drowned. While Tintin is exploring the ship, Tom knocks him over the head with a club and ties him up in the hold. Allan Thompson receives a telegram to drown Tintin from Omar Ben Salaad, the leader of the smuggling trade. Allan sends Tom down to go get him, but all he finds is Pedro, a fellow crew member tied up in Tintin's place.
Allan Thompson's crew then search for Tintin. As Tom, Allan Thompson, and Pedro search within the ship, they hear a bang from another room when Tintin opens a bottle of champagne. Allan decides to starve him out, for there is nothing to eat in the room. Later, Allan and Tom blow open the door to where Tintin is hiding using TNT, only to realize he is not there and has escaped the Karaboudjan on the longboat. Tom appears much later in the story in Morocco, and alerts Allan Thompson when Tintin and Captain Haddock are here.

Tom appears in the Red Sea sharks as a crew member aboard the Ramona (captained by Allan Thompson) an illegal slave trade boat working for Rastapopoulos. He was arrested later on, after they were attacked by the USS Los Angeles. 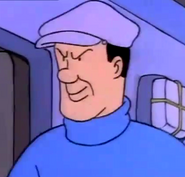 Tom as seen in the animated series.
Add a photo to this gallery
Retrieved from "https://tintin.fandom.com/wiki/Tom_(The_Crab_with_the_Golden_Claws)?oldid=28757"
Community content is available under CC-BY-SA unless otherwise noted.